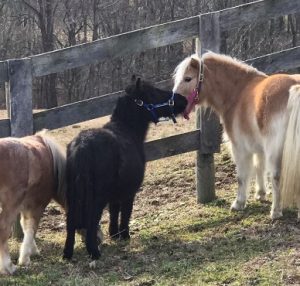 First off the obvious – mini horses are little. They’re meant to be little. Mini horses are not just young full-sized equines and they are not, technically, ponies. A miniature horse is typically considered to be an equine standing less than about 38 inches at the withers when fully grown. They can come in all colors and coat patterns, and have many of the characteristics and needs of their bigger relatives.

Selective breeding over the centuries created mini horses. They were first developed in Europe in the 1600s, often as pets of nobility although some may have been used to work in confined spaces such as mines. However, since they’ve been bred over the years primarily as pets, they generally are quite friendly and interact well with people.

In the 1960s, the American public began to appreciate miniature horses, and registries and show opportunities grew. As interest grew, however, so did some indiscriminate breeding. Minis found themselves in kill pens, offered at auctions with few buyers, or at private farms where they were neglected.

Today, rescues such as Fox Lea Farm are working to educate the public on the joys and benefits of mini horses, and the many things they can do (short of toting around a rider other than a wee child). 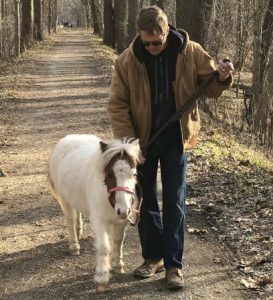 Minis can be shown in various competitive show situations, including trail and obstacle classes in hand (not with a rider). They also serve quite happily as companion animals and pets. And they can serve as guide horses for the disabled, are used in equine-assisted therapy, can be taught to pull a cart — and can just be enjoyable hiking companions.

Minis may be little, but they can be big fun!